How The Guitar Has Evolved

The ancestors of the guitar are two other stringed instruments called the lute and the oud, both of which predate written history. The next major innovation in guitars came with the flat top acoustic guitar which was largely invented by American guitar maker, Christian Martin. Although there are many variations, this general guitar style remains the most popular acoustic style to this day more than 200 years after its initial creation.

The next time you are playing your guitar, or if you are deciding to start your guitar journey, take a second to appreciate the ancient origins and rich evolution of this fascinating instrument! 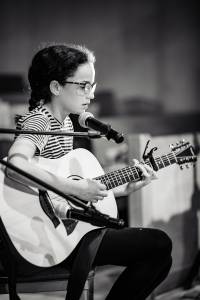 Upcoming Events Info – so much Holiday Fun:
Owners’ / Directors’ Smart Tips for Parents & Students
The Joy of Holiday Music Concerts ~ Ages 9 & Older
Thank you to our Spooky Dance Party participants!
Dance Showcase – Save the Date!
And much, much more…

Either Scroll Down the page and look for “REGISTER TODAY” links to register for your class or click one of the links below to jump to that section.